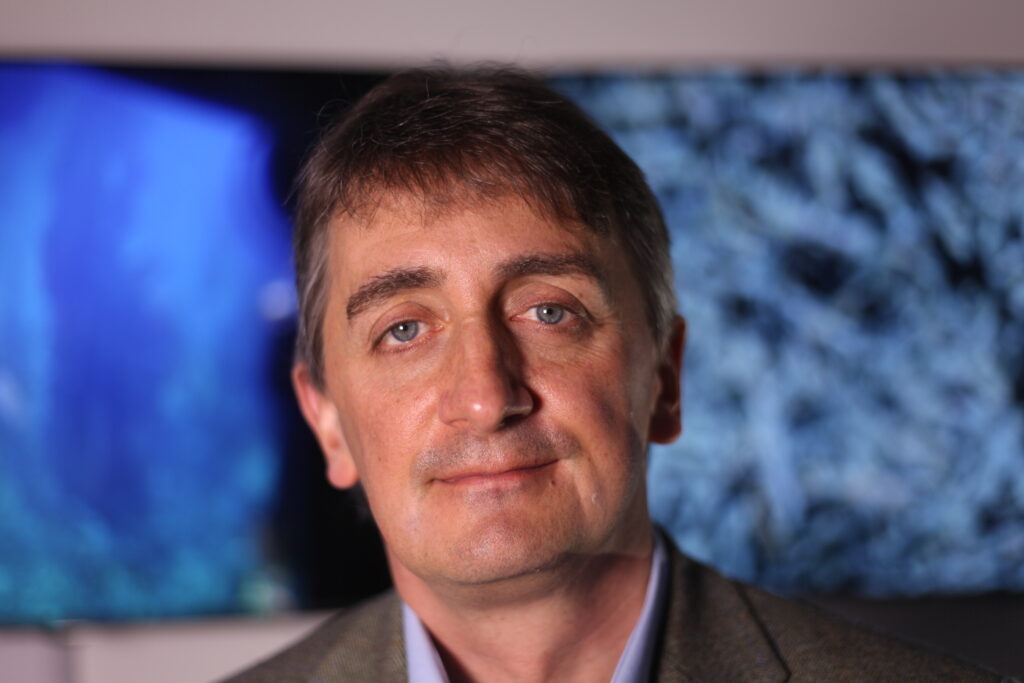 Dr Jon Copley joined the DOSI Advisory Board in 2021. He is Associate Professor in Ocean Exploration and Public Engagement within Ocean and Earth Science, National Oceanography Centre (NOC) Southampton at the University of Southampton. As a science communicator and deep-sea expert – his research includes ecology, biogeography and evolution – Jon is often called on by documentary-makers to share the exploration of the deep ocean with people worldwide, for example as a science advisor and onscreen contributor for BBC Blue Planet II, and he routinely interacts with broadcasters and news media to raise awareness of deep-sea issues and discoveries. Jon was kind enough to answer a few questions for DOSI – discover the experience he brings to DOSI and why he sometimes finds himself trying to ignore well-meaning advice!

My research explores the patterns of life in deep-sea environments, specifically studying island-like seafloor habitats such as hydrothermal vents to investigate ecology (who does what), biogeography (who lives where), and evolution (who is related to whom) in the deep ocean. In parallel, I work in the media to share the exploration of the deep ocean with people worldwide, and raise awareness of deep-sea issues and discoveries, having previously been a full-time science journalist. I’m also co-founder of a capacity-building company that has trained more than 15,000 scientists in how to share their research with wider audiences.

What inspired you to include the deep ocean/high seas in your work?

Deep ocean environments have always been the focus for my work. When I started out 25 years ago, some people said “you can’t make a research career only in the deep ocean”, but I’m still trying to ignore that advice!  And as most of the deep ocean is High Seas, that’s an important context for my work too.

Are there stories you can share about deep-ocean stewardship and/or key issues concerning the deep waters in the country where you are from or where you work?

In 2019, the potential vulnerability of biodiversity at hydrothermal vents was mentioned in a speech in the UK’s Parliament, with a recommendation for caution in regulation for deep-sea mining. I was pleased to see that issue raised there, having shared insights from our research with policymakers.

Hydrothermal vent chimney. Image courtesy of the NOAA Office of Ocean Exploration and Research, 2016 Deepwater Exploration of the Mariana

Where do you see valuable opportunities for deep-ocean stewardship in the next decade?

Over the next decade, I hope we can show plenty of success stories from deep-ocean stewardship to help convince political leaders of the benefits of that stewardship; for example, where biodiversity in the deep ocean has led to new insights for materials science or medicine, demonstrating the value of preserving that biodiversity so that we can continue to learn from it.

What is your favourite deep-ocean habitat or deep-ocean organism and why?

My favourite habitat has to be hydrothermal vents, as that’s where I’ve worked most so far. What attracted me to them in the first place is that they broke the supposed rules, in terms of how ecosystems can be supplied with energy, broadening our minds to possibilities of nature beyond the more familiar.  I couldn’t pick a favourite species though, even from hydrothermal vents – each is remarkable in its own way, but then that’s true of all species, not just in the deep ocean. When I’m out for a walk, I try to see the different species around us, such as grasses and dandelions, as if we were encountering them on a deep-sea dive – we’d think them just as amazing if we saw them for the first time down there.