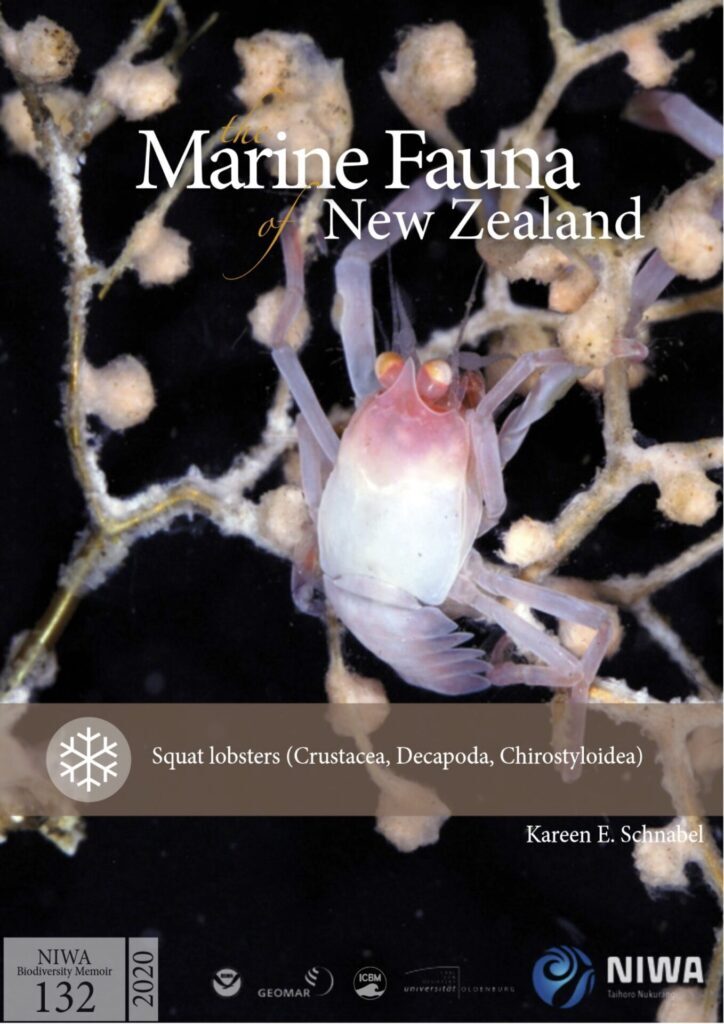 After a decade-long effort, NIWA’s latest Biodiversity Memoir has just rolled off the press. Written by marine biologist Kareen Schnabel, the 350-page treatise presents everything we currently know about the different kinds of squat lobster living in New Zealand’s waters.

Kareen’s memoir gives detailed information about 87 species of squat lobster in the New Zealand region. Twenty-six are brand new to science. Twenty-three had been known elsewhere and have now been recorded in our waters for the first time.

Squat lobster are fascinating creatures. They’re so-called because they tuck their tails under their bodies – giving them a flat appearance. The creatures can be found coloured in vivid reds, oranges and pinks, and range in size from a miniscule 3mm to a whopping 42cm. 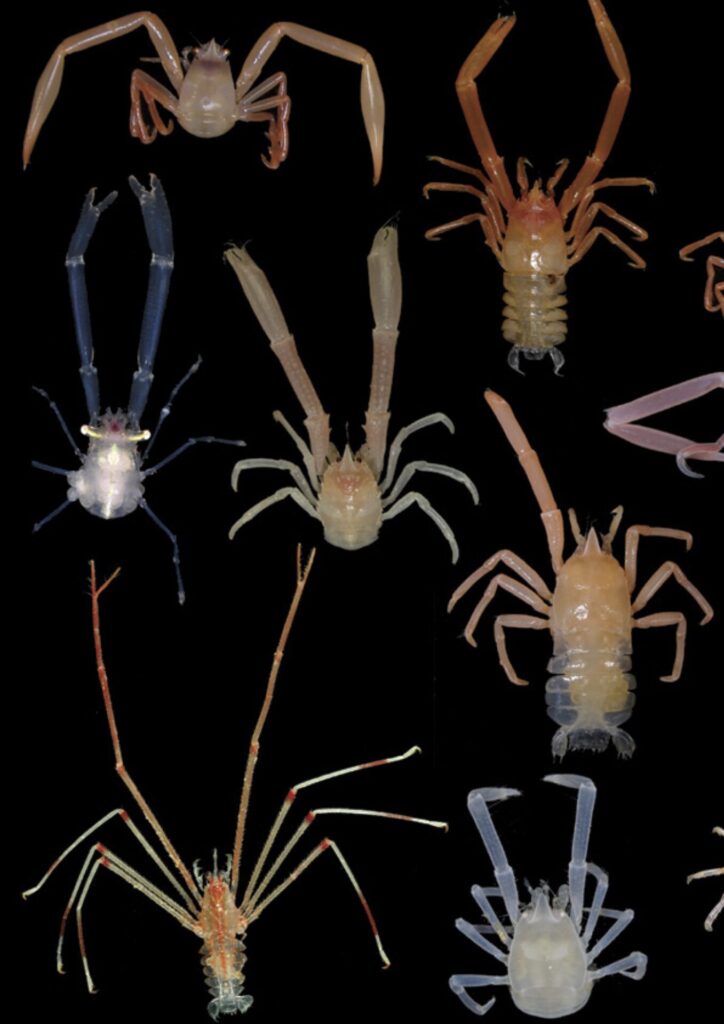 Not related to the common lobster, most of the species in our region live on steep, rocky slopes a few hundred metres below the ocean’s surface. Many attach themselves to corals and sponges in what’s thought to be a mutually beneficial arrangement.

This is Kareen’s first Biodiversity Memoir. It involved thousands of hours of work. The review process alone took two years.

Most of the samples described in Kareen’s Biodiversity Memoir were sampled from NIWA’s own benthic surveys. But she also made several trips to museums and collections here and overseas to examine squat lobsters sampled from the New Zealand region since the first research expedition by HMS Challenger in the late 1800s, and other famous expeditions such as Scott’s ill-fated Terra Nova expedition of 1910 – 1913 and the Danish Galathea deep-sea expedition of the 1950s.

In a nod to those that helped, supported and collaborated with her in the marathon effort, Kareen has named some of the newly-discovered squat lobster species after colleagues, friends and family, including the Collection Manager of NIWA’s invertebrate collection Sadie Mills, former NIWA taxonomist Shane Ahyong and supervisors and mentors from her PhD at Otago University.

Another new species is named after pioneering New Zealand marine biologist Betty Batham who disappeared off Wellington’s Seatoun beach in mysterious circumstances in 1974. Other species have been named after the area they were found in, or for their distinctive features.

A free PDF is available for download here, along with a link to buy a hard copy.

Want to tell us about your work? Contact us HERE.

Find our more about how DOSI works HERE.

Marine squat lobsters belonging to the two superfamilies, Galatheoidea Samouelle, 1819 and Chirostyloidea Ortmann, 1892, are conspicuous elements of marine environments at most latitudes and depths. Current global diversity estimates stand at around 1300 species of galatheoids and 345 chirostyloids. The rate of discovery has not decreased in recent years; a recent book on squat lobster biology highlighted gaps in regional inventories of species, citing the New Zealand region as an example.All species of superfamily Chirostyloidea of the New Zealand Exclusive Economic Zone (EEZ) are reviewed and inventoried from new and historical collections and revised where necessary. Collections within the Na-tional Institute of Water and Atmospheric Research (NIWA) Invertebrate Collection (NIC), the Museum of New Zealand Te Papa Tongarewa (NMNZ), Auckland War Memorial Museum Tāmaki Paenga Hira (AKM), and the Australian Museum (AM), have yielded well over 1700 catalogued specimens, some of which are from the Australian EEZ and International Waters, and from depths ranging from 20 to 2340 m. This work provides the first comprehensive monographic account of the New Zealand Chirostyloidea, spanning nearly 150 years of collections (1874–2017). Prior to this study, 38 species from two of the four families of the Chirostyloidea were known from the New Zealand region. The New Zealand chirostyloid fauna now covers three of the four families (except Kiwaidae) and comprises 86 species in eight genera: Chirostylus Ortmann, 1892, Gastroptychus Caullery, 1896, Heteroptychus Baba, 2018, Uroptychodes Baba, 2004, UroptychusHenderson, 1888, Eumunida Smith, 1883, Pseudomunida Haig, 1979 and Sternostylus Baba, Ahyong & Schnabel, 2018. Uroptychus nitidus (A. Milne-Edwards, 1880) is herein designated type species for the genus. Twenty-six species are new to science and 23 represent new distribution records. All available material is examined and listed, all species are illustrated, and diagnoses and keys are provided. A wider phylogenetic study of the group is under way but preliminary results of DNA barcoding are used as a molecular taxonomy tool and discussed.Chirostyloidea are typically associated with other macroinvertebrates, most commonly with large antipatharians or alcyonaceans and occasionally sponges, which are usually concentrated on marine habitats such as seamounts or deep-sea ridges. Some of their life history characteristics (abbreviated larval stages for three of the four families) and their evident resource-association have been linked to increased range restrictions and potentially higher rates of diversification than for galatheoids.As expected, the New Zealand chirostyloid fauna shows a close biogeographic affinity with that of the tropical south-west Pacific and eastern Australia. A few species are widespread in the Indo-West Pacific and over 40% are currently considered endemic. Results of the present study demonstrate a considerably higher species richness than previously known for the New Zealand EEZ, more than doubling the known fauna of the region.

Many global regions remain entirely or partially unstudied, implying that a huge potential for species discovery remains. The New Zealand region is comparatively well-sampled, although some areas remain unstudied. It is suspected that only a small number of species might be added to the regional chirostyloid diversity in the future. Major work remains, however, with the inventory of outstanding Galatheoidea squat lobsters.