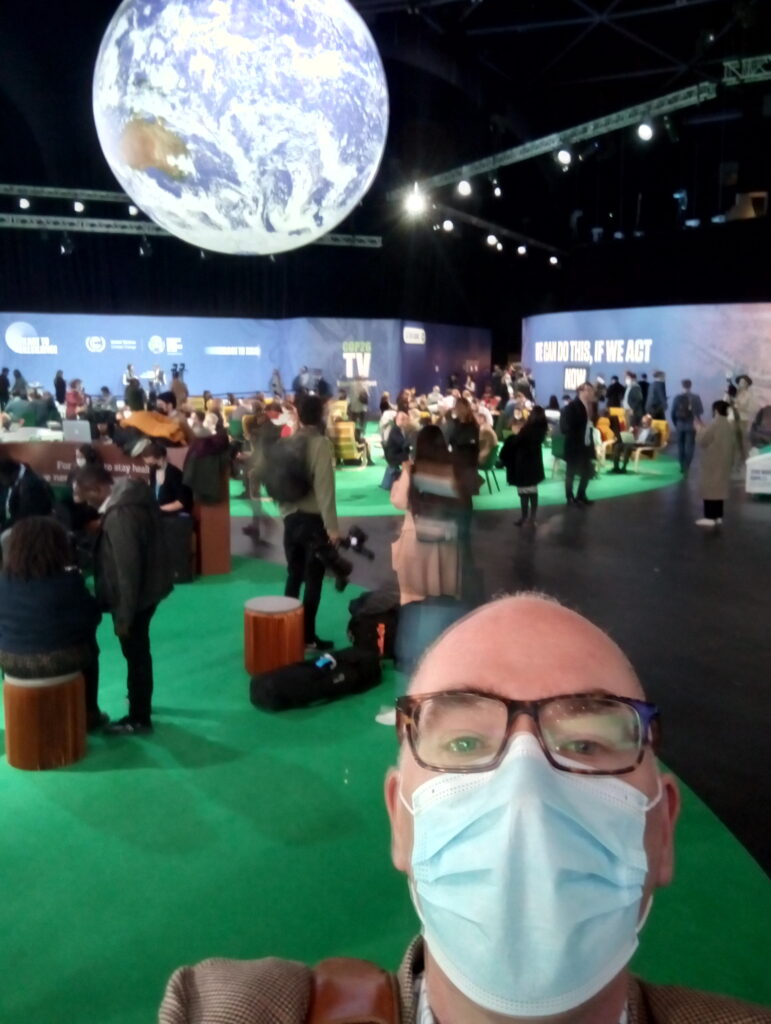 I was lucky to be selected to join my University delegation to go to COP26, which was being held in Glasgow, only about 200 km from my home city of Aberdeen. Given the number of people expected in Glasgow, I was fortunate to be able to stay at a friend’s house not far from the COP26 venue. Registration for COP26 was via a bewildering array of online forms and apps, not all of which worked well. Having a group chat meant that we were able to help each other with this and eventually I had my registration approved and received the barcode I needed to get my badge to get into the event.

As an NGO observer, we were asked to register after 14:00 on the first day of the COP26. Luckily, I managed to get into the green (public) zone to attend the Schmidt Ocean event that morning. It was quite a trek from the train station to the green zone as all obvious routes via the pedestrian bridges had been cut off for security reasons. Security was tight, but at only 40 minutes (compared to 1 ½ – 2 h for the blue zone) meant I made it just in time for the start of the event. The panel discussion was preceded by an excellent short film, featuring many DOSI scientists. The panel consisted of Jyotika Virmani (Schmidt Ocean), Alex Rogers (REV Ocean, Oxford University) and Jamie McMichael-Phillips (Nippon-Foundation GEBCO Seabed 2030 project and the discussion can be watched in full here. This proved to be an excellent start to COP26 with most ocean events scheduled for Ocean Day on 5 November.

I went over to the blue zone and despite multiple checks (COP26 letter, COVID passport, COVID-test, passport, airport style security check) I was able to get my badge fairly quickly compared to those who arrived that morning. Planning what to attend on each day was challenging as the programme for the day was only uploaded on the app on the same day. Given that there were negotiations, press conferences, scientific meetings and side events amongst others, there was a lot to choose from. I later found out that many countries, blocs, and other bodies had a ‘pavilion’ where they could have separate events that were timetabled separately and often only available from the pavilion or a separate website.

Only once you were inside the venue was it possible to gauge the sheer scale of the event. It took days to navigate and fully discover where things were. Despite this, I ran into DOSI member Torsten Thiele almost immediately, and then promptly lost him again in the crowds. The rest of the day I spent looking for events I had planned to see, but often got lost, was unable to get in because of capacity issues, or misunderstood what would be discussed (who thought that ‘Greening the Blue’ would be about the UN’s own carbon footprint and how to reduce it?). There were some real highlights to the first week of COP26, for instance the US joining the High Level Panel for a Sustainable Ocean Economy and the associated scientific statement, signed by many DOSI scientists. I attended events ranging from scientific story telling through the scientific/policy interface to fair trade (free chocolate!) which were informative and inspiring.

The best event of the week was in the AOSIS pavilion, hidden at the back of the main pavilion hall and was one of the few events which discussed the need for the UNFCCC, CBD and new BBNJ treaties to work together to address climate change effectively. I only found out fortuitously about this meeting – in the lunch queue I had the good fortune to stand behind Tekau Frere from Islands First who told me about this (she later gave a copy of the rather lovely children’s book ‘Our Sea of Islands, Our Blue Pacific’ which you should check out). I also reconnected with Joan Yang (Nauru) and Mereseini Marau (OPOC) who I had met previously at the BBNJ negotiations in New York. 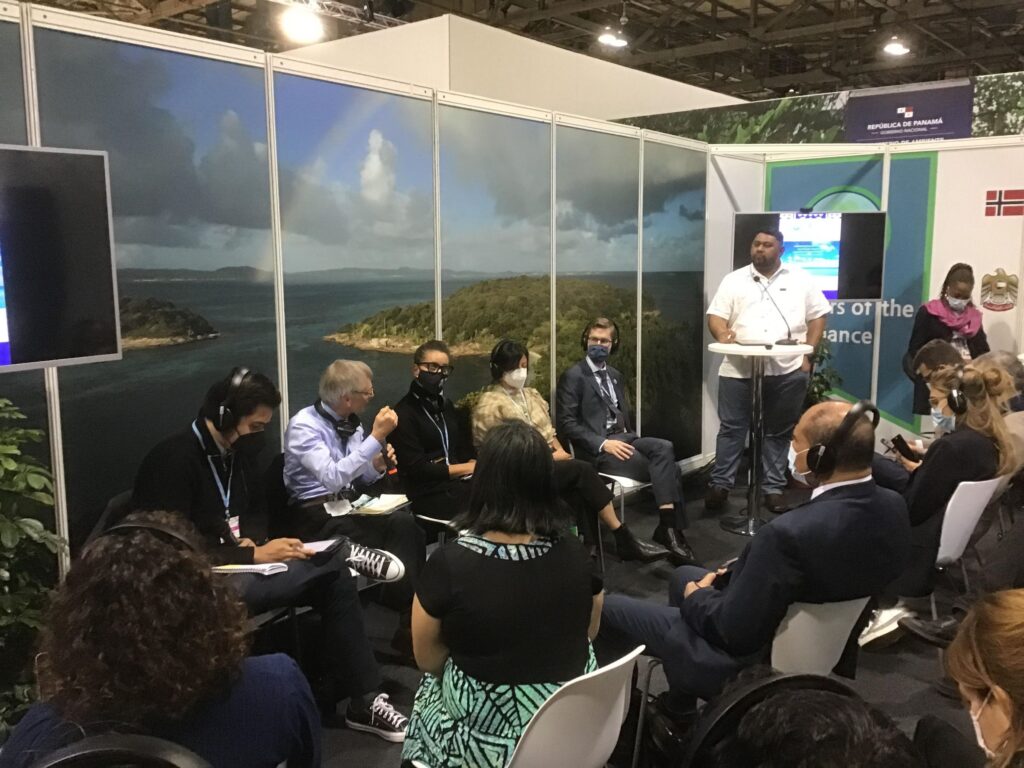 The AOSIS event at COP26

The AOSIS event was packed out and was introduced by Henry Puna, Pacific Ocean Commissioner and panellists were from the UK, as well as CBD (David Cooper), AOSIS (Janine Felson), IUCN (Minna Epps) and the Federated States of Micronesia (Clement Yow Mulalap). The UK started by voicing its commitment to 30 x 30, that is, to have 30% of the world’s ocean protected by 2030. David Cooper indicated the importance of reducing species loss and habitat destruction in order to mitigate the effects of climate change and the need for the IPBES process to be considered. Janine Felson, who represents Belize at the IPCCC and BBNJ, mention the importance of the nature of the collective global action being proposed under the new BBNJ agreement compared to the national nature of the action taken to counter climate change. Minna Epps showed how UNCLOS does not reference climate change, and that the UNFCCC only mentions the ocean once. With only 3% of climate change finance going to nature-based solutions more needs to be done to factor the ocean in to climate negotiations. Clement Yow Mulalap indicated how the BBNJ treaty will incorporate biodiversity, climate and the ocean, and the need to factor in IPLCs as they have first-hand knowledge of biodiversity loss and the effects of climate change.

My personal highlight on the Friday of week 1 was to meet Mark Dytham, who created PechaKucha, the presentation format that asks presenters to use 20 images (no text) for 20 seconds each to bring across a concept or idea. My own first attempt ‘Saving the Ocean with Law and Science’ can be found here. I gave it live at Strathclyde University Student union, amongst a group that included people presenting a low energy car, the benefits of proportional representation (in a superhero costume) and a man who had rolled across Europe in a ball made of steel wire. We enjoyed a few beers in the union bar afterwards.

On my final day in Glasgow, I was the guest of the National History Museum’s Adrian Glover at the New York Times Climate Change Hub. A walk through a rainy and windy Glasgow (weather that no umbrella could withstand) got me to the coolest venue that included a hall that had an indoor forest complete with the right smell. We met with a delegation of students from Scripps Institute of Oceanography (part of Lisa Levin’s MSC course that includes ocean policy) and witnessed amazing presentations on biomimicry and the role of the arts in communicating hope to counter the effects that climate change has on people’s spirit. My recommendation is to listen to the poetry of Emtithal Mahmoud, who gave an electrifying performance on stage.

I felt I had a good introduction to the climate COP process – I learnt about the scheduling, the side events, the events that occur round the main COP, from the green zone to local science engagement events. I made some good choices and some bad ones but learnt something from every event and met some great people on the way and reconnected with some old friends.

You can read more about Marcel’s work here.