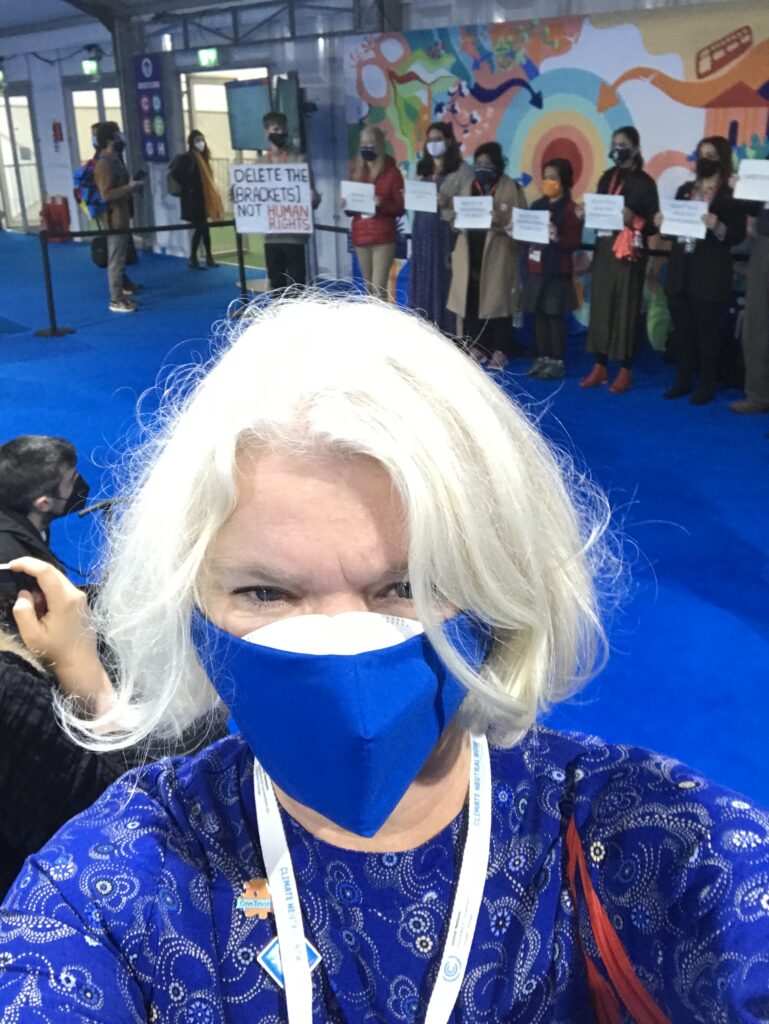 Dr. Brown and protestors at COP26.

This piece is the second in a series of COP26 reflections by DOSI members. The first, a piece written by University of Aberdeen professor Marcel Jaspars in the immediate aftermath of the event, can be read here.

I was honoured to attend COP26 in its second week as part of the University of Aberdeen delegation.

Three weeks later, the flurry of activity and people, lack of fresh air, double masking, security, art, selfies, media, protests, daily LFTs, passing world leaders and celebrities (very few with an entourage), working out where to get a seat to view events online if one could not get in physically behind the door, and queues, queues, queues has started to fade as life returns to “normal”. But with that return comes the fear that the learnings and resolves, as well as the frustrations, might also start to fade. Time, then, to reflect.

My main area of teaching is intellectual property (IP) and the appropriateness of its balances and limits in the rights.  My research builds on this, exploring the intersection, or lack of it, between IP and other legal fields in addressing key societal challenges. In recent years, I have focussed on climate change and the ocean in scholarship, policy briefs and through the Song of the Ocean.  I have been honoured to be part of DOSI’s work.

Attending COP26 in my home city was exciting and unforgettable. Even the frustrating bits were worth it: one could learn much about the negotiation of previous international treaties relevant to IP, information, technology and climate change  (such as TRIPS, the Copenhagen Accord and the Paris Agreement); the questions about the size and scope of the delegations and advisers of some countries; the extent to which NGOs are able to observe and inform negotiations; the links between side events (as in outside the main plenary we see reported), protests and negotiations in the immediate, shorter and longer term; and the power imbalances between countries and the impact of this.

It is another thing to be refused entry to events, to be deluged by the number of events and struggling to work out which events there were, wondering if there would be a space because of COVID restrictions, and seeing colleagues understandably taken aback by all this. The political economy of IP and climate change (and of international negotiations in general), was suddenly very real.

As hours passed at COP26, I gathered my bearings. I adopted the technique for several days of having no particular plan – all events provided invaluable insights, new perspectives and challenges: be they more external side events online such as Scotland’s Climate Ambition Zone, the Green pavilion which  by week two was open to all (two highlights were a disability event and the Living Wall), activities in the Blue Zone (open only to COP26 delegations), the Presidency and other official events and, of course, the online Ocean Pavilion. I found the Earth Negotiations Bulletins invaluable each day, as well as social and legacy media, in trying to assimilate what else had happened.  I tweeted my own reactions daily, including some photos @IGFTowardAccess (#COP26 #TogetherforOurPlanet #UniABDNCop26).

Two overall messages were the need for adaptation finance (alongside arguments that one should look beyond money) and addressing loss and damage which is already occurring: Strong messages from Big Ocean/Small Island States were very compelling. I have continued to reflect on events led by NGOs challenging present fossil fuel activities and their large contingent of lobbyists at COP26; industry presentations exploring their innovation and sustainability approaches,  changes to business models and the place of standards; sessions led by indigenous leaders setting out how a Western capitalist approach to nature is fundamentally at odds with their sacred values – a valuable reminder given the ongoing place of carbon trading; and the sharing of lived experiences and data about the differing impact of climate change on gender and the need for a holistic and fair approach for all.

The Ocean in Focus

The Ocean was, rightfully, a constant theme. A message from the Green Zone lingered long: “The ocean is an unsung hero in the fight against climate change” (SKY WWF).  The EU Ocean Day on 9 November discussed the UN biodiversity beyond jurisdiction negotiation, the new EU Arctic Policy and the need to raise the bar by reaching beyond factual decisions to transformative change and a new Blue Deal, building on the 3rd UNFCCC Ocean Declaration. And on Friday 12 November (in theory, the last day of COP26) the Song of the Ocean was the “Dawn Chorus” element on Classic FM.

I attended the plenary exploring the second draft of what came to be the Glasgow Climate Pact. Optimism, at least from some, was growing. The draft referred to fossil fuels, the ocean and loss and damage. The plenary contributions brought informed and compelling sharing of lived experience and arguments of the need for collection action – particularly from the Big Ocean states of Tuvalu and the Marshall Islands.  China and India were notable in taking a different approach –still calling for action but disagreeing as to how, and calling for more flexibility and the opportunity for their industry to take the path previous taken by industrialised western nations.

When I left on that Friday evening it was interesting to watch people: some were leaving with hope, while others were ready for lengthy offline negotiations. Pizzas went past, rooms were made available for dialogue and the question of whether a delegation was staying in a hotel on site or far away and with more limited support and information seemed to become more important than ever.

As I followed remotely on the Saturday, the third draft was delivered late. It was less strong than the previous versions on both loss and damage and the ocean, and, as has been widely noted, ultimately accepted a further last minute change regarding fossil fuels before agreement was reached.

My own view is that something was achieved, but there could have been more and there needs to be more, including new approaches to values, goals, rewards and collaboration.  The COP26 experience suggests that the negotiations are alive and that there is still time, as well as a huge need for engagement, evidence and policy making, to fully entrench the need for a fair, coherent and new approach to climate change – yet the time has run out for a longer-term approach to be taken. I look forward to working with DOSI as part of this.

You can read more about Abbe’s work here.